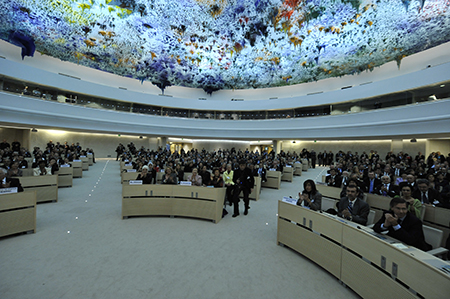 GENEVA (8 December 2015) – UN experts have urged all States to ratify two key human rights treaties that celebrate their 50th anniversary in 2016, as a concrete commitment to the freedoms enshrined in the texts.

“The two Covenants, together with the Universal Declaration of Human Rights, set out the inalienable rights of all human beings. In the half century since the Covenants were adopted, many countries have changed their laws and policies, and the lives of countless people have improved, but the pressing challenges of our age show the continued relevance of the treaties and the need to respect them,” said Fabian Salvioli, Chair of the Human Rights Committee.

“States should show the absolute commitment of the international community to human rights by achieving universal ratification of the Covenants for the 50th anniversary,” he added.

“We call on States to protect and promote all human rights, and for those that are not parties to the two Covenants, to ratify them as a matter of utmost importance. Governments need to manage their economies but a financial crisis should not be an excuse to overturn economic, social and cultural rights,” said Walid Sadi, Chair of the Committee on Economic, Social and Cultural Rights.

“The two Covenants together are a main pillar of the human rights system and the foundation for the enjoyment of all rights,” he stressed.

The campaign by the UN Human Rights Office is entitled “Our Rights, Our Freedoms, Always.” It focuses on the timeless themes of rights and freedom, in particular freedom from fear, freedom of speech, freedom of worship and freedom from want, and the work that continues to secure and ensure them.

More information on “Our Rights, Our Freedoms, Always,” campaign: http://www.ohchr.org

The Human Rights Committee and the Committee on Economic, Social and Cultural Rights are composed of international independent experts who monitor how States are implementing the ICCPR and the ICESCR respectively.

*Check which countries have ratified the Covenants and the other main international human rights treaties: http://indicators.ohchr.org/

More information on the Committee on Economic, Social and Cultural Rights: Click here to view