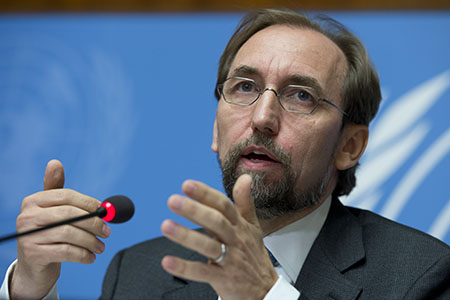 GENEVA (9 December 2015) – Two fundamental human rights treaties adopted by the United Nations General Assembly in 1966 are as important and relevant today as they were half a century ago and should be ratified by all States, UN High Commissioner Zeid Ra’ad Al Hussein said in a message for Human Rights Day.

“The two Covenants are the bedrock of what we now recognize as international human rights law*,” said Zeid. “They have to date been ratified by 168 and 164 States respectively, but 27 countries have ratified neither and eight States have ratified only one. In the past five years, the number of ratifications has dwindled to an average of just one a year,” he noted.

“Today, we face new, evolving and alarming issues such as climate change, terrorism, the growth of hate speech against religious and racial minorities, curbs on freedom of speech and of association and on workers’ rights, and the threat to privacy in an increasingly digital world,” Zeid said.

“The challenges of our age are confronting us with hard choices amid mounting intolerance and inhumanity. The Covenants, together with the legal framework and jurisprudence of the expert Committees who oversee their implementation, can help us navigate these challenges,” said the High Commissioner.

“The Covenants spell out fundamental freedoms – freedom from fear, freedom from want, freedom of speech and freedom of religion. They also detail rights that cover so many facets of human life: the right to liberty, to security, to education, to health, to equality between men and women and the elimination of all forms of discrimination,” he said.

“The Covenants are not dry, abstract legal texts but vital tools to ensure freedoms are upheld and promoted, and crises are met with coherent and humane responses. They make a difference to the everyday lives of people in countries that have ratified them,” the High Commissioner stressed.

“States should see becoming a party to both the Covenants as a positive decision that leads to constructive monitoring and guidance on improving compliance with international human rights norms,” Zeid said.

“The two Covenants are also a means for people to hold their governments to account for respecting and upholding civil, political, economic, social and cultural rights, and to secure redress and reparation for human rights violations,” he added. “But 50 years on, far too many people do not know their rights or how to claim them, which is why my Office is launching a year-long campaign, entitled ‘Our Rights, Our Freedoms, Always,’ to promote and raise awareness of the Covenants.”

Check which countries have ratified the two Covenants and the other main international human rights treaties: http://indicators.ohchr.org/.

More information on “Our Rights, Our Freedoms, Always,” campaign: http://www.ohchr.org

*The Universal Declaration of Human Rights (UDHR) was proclaimed in 1948 as a common standard of achievements for all peoples and all nations. It sets out, for the first time, fundamental human rights to be universally protected. But it has no legal force. This is provided by the two Covenants, which were adopted on 16 December 1966 and came into force in 1976. Together the UDHR and the Covenants form what is known as the International Bill of Human Rights: click here to view