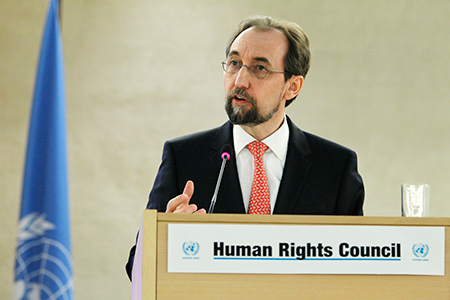 I am profoundly honoured to be among you for this historic occasion, and I take this opportunity to thank Deputy Foreign Minister Gatilov of the Russian Federation for his country's sponsorship of this high-level panel discussion.

Half a century ago, the General Assembly unanimously adopted the two great covenants which brought force of law to the principles laid out in the Universal Declaration of Human Rights.

Humanity’s collective experience of genocide, of devastating warfare, of colonial oppression and financial devastation had driven home the fact that respect for the human rights of all individuals ensures that nations and peoples can live in peace, with development that is sustainable and long-lasting.

Perhaps never in this Council’s decade of history has it been so vital to recall the transformative power of those fundamental lessons. Human rights build peace within and among States. Human rights ensure opportunities and the right to development for all.

What connects us is much stronger than what divides us. People everywhere, have the same hopes and the same rights. The two great Covenants that we celebrate today commit States to ensure respect for the rights of all their people.

These rights are inseparable. Discrimination, state repression, corruption, insecurity and violence generate poverty - and people who are hungry are not free. Civil, political, economic, social and cultural rights work together, amplifying each other. They build up a virtuous spiral that primes the forces of sustainable development and peace.

This vision has achieved a great deal in the past fifty years. The Covenants are reflected in many national constitutions and laws, generating profoundly beneficial change in the lives of millions of people.

Together with the indispensable expert guidance and scrutiny of the Human Rights Committee and the Committee on Economic, Social and Cultural Rights, they have helped to extend rights to people crushed by tyranny and discrimination for generations. They have taught us to respect the growing diversity of our societies, and they have sustained the force of grassroots activism, by ensuring that individuals and groups around the world can hold their governments to account for respecting and upholding civil, political, economic, social and cultural rights.

It is also crucial that the Covenants be more widely and effectively implemented. Economic inequalities are deepening. When 62 people enjoy the same wealth as 3.8 billion individuals and the wealth of the poorest part of the world’s population is diminishing steadily, we are far from the Covenants’ vision of freedom from want.  Domestic violence is still not outlawed in one-third of States. Freedom of the press, of belief, of opinion and the right to peaceful assembly are under acute threat in many countries, and the democratic space is shrinking. Torture – and slavery – continue to inflict intolerable pain on far too many people. No valid grounds can justify such practises, including State security.

The 50th anniversary of the Covenants must be an occasion to reaffirm our commitment to the International Bill of Rights – the great tripod of principle and commitment that is formed by the two Covenants and the Universal Declaration. These great texts are the bedrock of sound governance. In them lives the world’s hope for peace.